Point Place
The Basement is located in the Forman residence in Point Place, Wisconsin on FOX comedy That '70s Show.

Formally known as Eric's "Bat Cave," the basement is the hangout for Eric's friends, where they spend most of their time hanging out, eating sweets, watching bad TV and... sitting in a circle. The basement is essentially their club house, only open to those initiated,[1] which is why Eric and Hyde for the first few seasons of the series adamantly endeavor to have Jackie banned. Even after Eric leaves Point Place in Season 8, the gang still hangs out in the basement, on account of Hyde still living there.

This is one of the most prominent sets of the show. Notably, it is the first set seen in the series, with Hyde, Kelso and Donna encouraging Eric to steal some beer from the party upstairs, as well as the last, as the kids run up the stairs counting down to New Year's.

There are two exits from the basement. The rear exit will take you to the kitchen. The right exit will take you directly to the driveway. The basement also has two windows: one on the way down the stairs, and one near the shower curtain. At the far end of the basement, under the stairs, is Hyde's (and briefly Jackie's) room. It's noticeable throughout the series that the direction the basement faces is sideways from the direction the ground floor of the house faces (if it were a real house). If you were on the ground floor, walking from the kitchen to the living room, you would be facing the front of the house. Sitting on the couch in the basement is also facing this direction, toward the front of the house. This is deduced by the outside stairs that lead down to the basement.

The basement's main features include a couch next to two plastic chairs and a wagon-wheel table. Other aspects of the basement include the TV, cleaning supplies, washer and dryer, fridge and freezer with sodas and ice cream, a tricycle, an American flag chest, records, a record player, an old guitar, 8-tracks, a radio and a Green Bay Packers helmet (The Stupid Helmet). Things left out on the table include headphones for the music players, an earpiece for the tv, random chips and playboy or porno magazines. The basement's walls are covered in posters. In Reefer Madness, Red hangs a smoke detector next to the right exit door which remains there until the end of the series.

Like the rest of the basement, Hyde's room has lots of music posters, however, his posters are more punk rock where the basement is a mix of music, including Todd Rungren and Led Zeppelin. 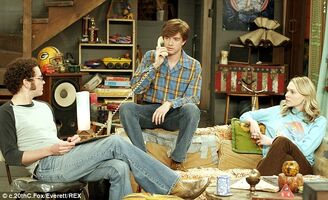 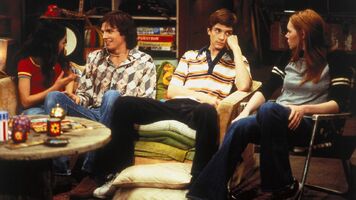 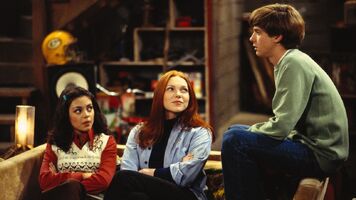 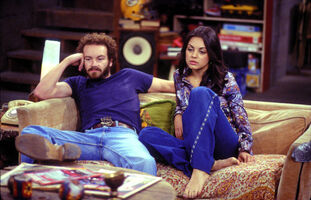 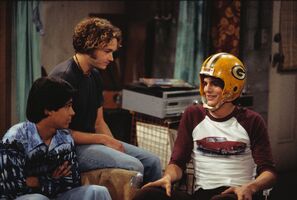 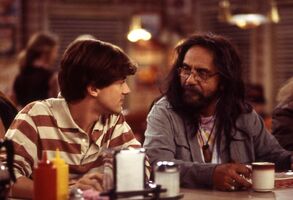 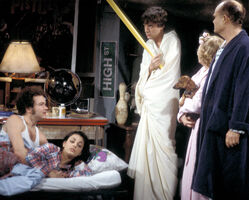 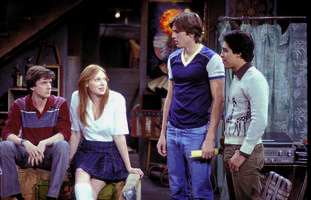