Red & Kitty is a relationship on FOX comedy That '70s Show, portrayed by Kurtwood Smith and Debra Jo Rupp.

Red & Kitty's relationship is the longest running relationship of the show, remaining steady for all 8 seasons. Red and Kitty Forman are the parents of Eric Forman (Topher Grace), Laurie Forman (Lisa Robin Kelly) and the adoptive parents of Steven Hyde (Danny Masterson).

Red met Kitty at a USO dance in 1952. Young and impetuous, he and a Navy buddy dropped their pants, showing shorts that read "Hello, Ladies." Just as a younger, drunken Kitty was heading out, she bumped into Red as he was bent over. Slightly embarrassed, Red immediately corrected his pants and pulled Kitty to her feet, and fell in love with her at first sight[1].

At one point while they were dating, Red cheated on Kitty when he passionately kissed another girl. Red had not kissed Kitty as he did the other girl in public because he respected Kitty and Kitty forgave his transgression. When the issue came up again, Kitty forgave Red once more and they went to the movies to rectify what had happened in the past.

During the Korean War Red had been to a strip club. This comes up when the boys hire a stripper and Red accidentally reveals to Kitty that Strippers are paid in single bills

Throughout the series, Kitty and Red are the healthiest couple on the show. They never have any major problems that could have affected their marriage. Red and Kitty are very different in temper and demeanor, Red being the outwardly tough, yet deep down vulnerable and emotional person (hence the temper), while Kitty, a nurse, provides the outwardly caring, yet deep down incredibly strong character. This provides the couple with a balance, both in their parenting and in their work to keep their family afloat during the economically trying 70's.

Kitty – Oh heck, we’ve been through worse times than these!
Red – Just for the fun of it Kitty, when was that?
Kitty – Well I don’t know
Red – Are you worried?
Kitty – Nope. Are you worried?

They are the "parents" to all the kids on the show. Even though Red is constantly angry with them, he proves he does care about them. Kitty listens to their problems and feeds them to cheer them up. They discipline the kids much and deal with much of their consequences rather than their own parents. But they support each other too. When Red was out of a job, it was Kitty who gave him one of the encouraging boosts that got him back to work. Or when Red gave Kitty, Schatzi, to encourage her to be more happy. Red and Kitty seem to have a very active sex life and they can be seen running to their bedroom in multiple episodes. They have no problem doing it at anytime on the show. Red and Kitty are arguably the most happy couple on the show and always seem to fix their issues rather quickly. They are the model couple on the show.

Red and Kitty have two children, Laurie Forman and Eric Forman and take in Steven Hyde as one of their own. 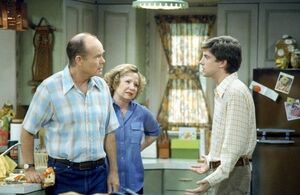 Kitty has a relatively good relationship with her son, Eric (Topher Grace), whom she has a habit of overprotecting, even to the point of saying that his girlfriend Donna seduced her "poor boy and tricked him into having sex with her", which is false[2].

Red has a somewhat strained relationship with Eric, who often does things that "piss him off"[3]. Red often tries to punish Eric[4][5] and threatens him on a regular basis[6]. Despite this, Red loves his son, and he has admitted this on several occasions; once when drinking in Season One, once when drunk and under pain-reducing medicine after a dentist visit[7], and once when Eric left for Africa[8]. He has trouble admitting that he misses his son after Eric has left, but then tells Kitty, who is recording what he says, unknown to him: "Of course I miss him. He's my son"[9]. 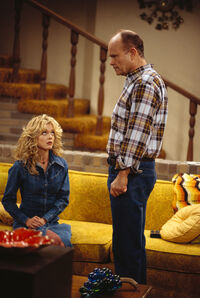 Laurie is Eric's manipulative older sister. Eric's father Red spoils her and obviously favors her over Eric, often giving her money. He is a tough, no-nonsense father and tends to favor his daughter Laurie (Lisa Robin Kelly) whom he doesn't realize is very promiscuous. He always sees Laurie as 'Daddy's Little Girl' instead of the mean-spirited, promiscuous person she truly is, but becomes wiser to her in the second season after finding out she lied to him about moving in with a friend when she was really living with a young man.

Laurie and Kitty have a very strained relationship, Kitty seeing her daughter as very promiscuous and not being fooled by her 'good girl act'. Sometimes she overlooks her daughter's flaws, but often gets annoyed at her.

Laurie birth was at first said to be July 15, 1958. In the Season 2 episode "Laurie Moves Out" she was said to be 20, and the year was 1977. But this is skewed by the fact that when Red and Kitty had Halloween in 1957 in a flashback, Kitty discovers that she's pregnant with Laurie, which would make her birthday 1958. Further complicating this is the fact that if Eric's birthday is said to be in May 1959, he's barely 9 months younger than Laurie - while possible, it would have meant that Kitty got pregnant almost immediately after delivering Laurie, a possible, but unlikely, occurrence. Though in a season 3 episode, it's stated that Eric was an accidental child. But Laurie is 2 years older than Eric (she in college and he is a Junior in High School). If Laurie were conceived in '57 and born in '58, Eric would've been born in 1960.

Hyde was a longtime friend of Eric's being one of his best friends since childhood. Hyde spent time around their house much of Season 1 pretty much sharing their meals with them. When his mother abandoned him, The Foremans willingly took them in Hyde Moves In and he has practically lived there ever since. Red became his father figure he needed and pretty much scolded him like a father when ever he did something wrong. Kitty filled in mother role Hyde's mother abandoned. She especially felt bad for him because of the abandonment and nurtured him as much as she did Eric. He was very much a child of Kitty and Red's, like Laurie and Eric.

Kitty discovered she was going through menopause and it proved to be much of a challenge for both her and Red[10]. Kitty had to endure symptoms of menopause such as hot flashes and mood swings. What seemed to bother her the most was the fact that she could no longer have any children. But she moved on from the fact eventually being told by Red that she is gonna have grandchildren one day and pretty much let her mood swings influence her daily life, such as the time she broke a television remote after someone would not fix or when she broke Kelso's electronic football game because he would not stop playing it when she was trying to explain her menopause with two bars of soap[11]. Red cautiously tried any way possible to keep Kitty happy. He even went as so far to get her a dog to lighten up her day[12]. It did some justice making her happier. When Red thought Kitty was a bit too over the edge, he would always suggest a nap in which she would become even more irritated by the situation.

Pam is the attractive, mainly-absent mother of Jackie Burkhart. She garners the attention of all men, including Red. Her presence causes some minor conflict between Red and Kitty in terms of whether or not Red finds her attractive, among other problems.

Retrieved from "https://that70sshow.fandom.com/wiki/Red_and_Kitty?oldid=21843"
Community content is available under CC-BY-SA unless otherwise noted.