51
Midge Pinciotti is a character on the FOX comedy That '70s Show.

Midge is the lovable but dim-witted mother of the red-haired tomboy Donna Pinciotti, and originally Donna's less-frequently seen younger sister, Tina and wife of Bob Pinciotti. Originally from Madison, Wisconsin; Midge was born to parents Mark Ryan and Sharon Elise Aldren. Midge was never the brightest student in the school, lacking so much a brain and a thought process. Attending Madison O'Hara High School, she met Bob, where they instantly fell in love.

Because of her impaired thought processes, which leads her to be easily influenced by '70s fads (particularly Bob, who sports stereotypically bad '70s permed hair, later revealed to be a hairpiece and wears gaudy polyester leisure suits), she constantly embarrassed their daughter, Donna.

Bob and Midge were high school sweethearts, and Bob fondly recalls the first time he saw Midge: "She was the tallest girl in chemistry class". Midge recalled that "Bob was the shortest boy, but what he lacked in height he made up for in shortness". It is hinted that Bob and Midge got married because Midge became pregnant with Donna while still in high school (which conflicts with the fact that Bob and Midge had an older daughter Valerie, so perhaps it was actually Valerie with whom Midge was pregnant at their marriage).

Bob ran a local home appliance store called "Bargain Bob's", which is eventually run out of business by Price Mart, leaving the family broke for a time. Bob later "invents" a device which dispenses facial tissues from a car visor making him "rich again", as described by neighbor Red Forman.

Bob and Midge moved in next door to cantankerous, overbearing Red Forman and his sweet but troubled wife Kitty Forman when Donna was still a small child in 1968. Originally Bob and Red enjoyed each other's company, to the point of going on hunting and fishing trips together. At one point the Pinciottis seemed to "change" and become (in the words of Red) "dumb asses".

They both annoy Red greatly, particularly Bob, and Red makes little to no effort to hide his annoyance, but no matter how many times he insults Bob, Bob just smiles and laughs it off because he thinks Red is just kidding. From time to time Red does try to partake of male bonding activities with Bob, but is generally frustrated. Red does not seem to mind Donna. He may actually like her better than her parents.

Bob and Midge are somewhat risqué with each other, even going so far as to have sex on the hammock in broad daylight where Donna used to read her Nancy Drew mystery books, which she saw and was very horrified over for some time. They are both nudists and commonly hosted nudist parties.

Midge was the neighborhood mom Eric Forman and his male friends fantasized about when coming of age (although Kelso and Fez have both admitted to having sexual feelings for Kitty Forman). During one episode when Kelso and Fez thought that Eric had sex with Midge due to Midge's panties being left behind after a Midge-Bob encounter in Eric Forman's Vista Cruiser, they immediately began bowing to Eric and calling him "a God! A God, I say!" She is also dimwitted, which often results in her being the butt of jokes.

Problems arose when Midge started expressing dissatisfaction with just being a housewife, which Bob, being a somewhat old fashioned kind of guy, had difficulty accepting. They began to fight regularly and in the second season they separated, but continued to live in the same house under the agreement that they could see other people; something Red and Kitty felt was a bad idea and encouraged Bob to "think hard" about. At Red's birthday, Bob and Midge brought along separate dates, but Bob got annoyed with Midge's date. Bob's argument with Midge led to a passionate tryst in their car. Eventually Bob and Midge reconciled and even went so far as to renew their vows.

When it was discovered that Donna had been engaging in sex with Eric, Bob's angry reaction to Donna losing her virginity before marriage was very similar to Kitty's upset feelings over Eric. To Donna's horrified embarrassment, Midge's reaction was to ask, "So, how was it?"

In the early episodes Bob and Midge had a total of three daughters: Donna was the middle daughter, an older daughter named Valerie who was already in college, and a younger sister named Tina who appeared in the episode "Eric's Burger Job". Both the others were quickly phased out and never seen or heard from again, leaving Donna as the Pinciotti's only daughter. This is a similar occurrence to what happened to Chuck Cunningham on "Happy Days" and to Judy Winslow on "Family Matters".

Tanya Roberts ceased to be a regular member of the cast in 2001. This eventually led to Bob and Midge's on-screen divorce and her leaving for California to "pursue a career on Broadway" (again showing her dimwittedness. She guest starred for a few episodes after that). She and Bob may get back together in the '80s. 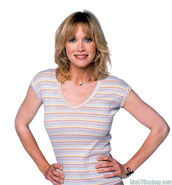