That '70s Wiki
Register
Don't have an account?
Sign In
Advertisement
in: Characters, Main Characters, Season 2 Characters,
and 5 more

39
Leonard "Leo" Chingkwake is an aging hippie and the owner of a photo hut at which Steven Hyde worked. Leo himself does not have a strong work ethic, often putting play before work and maintaining an easy-going attitude in all things, business included. However, he is akin to a second father for Steven, despite his shortcomings.

Leo's first appears when he interviews Hyde to work at the Fotohut. The entire interview started with Leo saying, "You like photos man?", then Hyde said yes, and Leo responded with, "Cool! You got the job man!" After the interview Leo told Hyde that as long as the Hut does not burn down it has been a good day, and that even if it did burn down, it is ok because he has a few more.[1]

When Hyde and Leo play the Game of Life at the Photo Hut, a customer requires attention. Leo tells Hyde that if he helps the customer, he will (ironically) be fired. At one point, Leo temporarily hires Fez to work at the Fotohut, but then fires Fez when he shows a stronger work ethic than Leo.

After the gang hasn't seen Leo for a while, Hyde receives a letter from Leo that explains that he was supposed to be in town for a brief period and stayed for eight years instead. He goes on to say that, given the time elapsed, he needs to get back in touch with his wife.[2]

A year later, Leo finds Eric Forman on a road trip. Shortly after their meeting, Hyde has Leo manage the record store owned by Hyde's father. Hyde takes over when Leo fails at the job.[3]

Leo appears to be a very confused individual. In "Who Wants It More?", he finds Hyde, Fez and Kelso looking for UFOs. Hyde asks Leo what he is doing. Leo responds with, "Wow, that's a really good question man!", and does not know the answer. In the same episode, Leo reveals that he thinks the Goodyear blimp he saw at a football game is a UFO. Further indicators of Leo's confusion is when Leo made the statement, "He's making us look bad in front of the boss!" at the Photo Hut, forgetting that he was the boss. In one episode, he also reveals that he met God on the bus, who told him the meaning of life and gave him a pretzel but, of course, does not remember it due to his focus on the pretzel.

Leo has a bad memory. When he and Hyde were reunited, for example, Leo did not remember that he owned a Photo Hut. It is revealed in "Stone Cold Crazy" that drugs can refresh Leo's memory.

In "Long Away", Leo reveals that he is a war veteran and fought in World War II serving as supply truck driver. He was famous for driving a supply truck in front of the Nazi tank formation to rescue an entire platoon. Curiously, he also mentions spending much of the Vietnam War in Canada, even though his status as a WWII veteran would make him legally exempt from the draft. However, this could be attributed to Leo's bad memory or confusion, since after he said this he was asked if he was a conscientious objector, and Leo responded saying he did not mind. In "Kitty and Eric's Night Out" Leo, while playing a game of Battleship, suspected that he might have been in the Navy.

In "Reefer Madness", when Hyde was accused of possession of illegal drugs, Leo revealed to Red Forman that he has indulged in the use of marijuana once or twice himself. Red was unsurprised.

Leo has two cousins, Theo who is a contractor, and Eli (played by Bobcat Goldthwait), both of them share his appreciation of marijuana. Leo also has made reference to a "big brother" that likes to interfere with his business (when Leo told Hyde this, Hyde thought Leo was referring to the government, but then Leo said he literally meant his big brother). Leo also has a dog, named Dr. Zhivargo, that Leo once accidentally fed illegal drugs instead of dog food. Leo has also mentioned that he is, or was, once married with a son, but his wife took his son and left him some time before his son's sixteenth birthday. 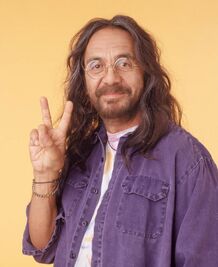