Jackie's Cheese Squeeze
"Jeric" or "The Forbidden Ship" is the pairing between Eric Forman and Jackie Burkhart.

Although they never kissed or dated, and despite that they often voiced their annoyance of each other, they have shared many moments of compassion with each other, and a large amount of fans support the romantic pairing of Eric and Jackie. The non-canon pairing has a large following in fan fiction. New Jackie/Eric stories are being posted all the time. Notably, they have similar romantic viewpoints, wanting to marry someone faithful and with commitment.

Throughout the show, Eric and Jackie have a clear frenemy relationship. They demonstrate their irritation with each other, but show compassion for each other at many times, and through it all, are close. At the series' beginning, Jackie admits to trusting and liking Eric, confiding in him that she might be pregnant. In "The Pill", for example, she says to Eric's surprise, "Look, I've always been able to trust you--and, God, you are such a nice guy.” Later in the episode, once Kelso threatens to break up with Jackie, Eric yells at him, having developed protective feelings towards her. This proves that their burning of each other throughout the show is only for laughs, and friendly bickering, as none of their hostility was ever serious.

Eric was consistent in ignoring Jackie as an object of sexual desire, but this changes in "What Is and What Should Never Be" where Hyde helps Eric realize that Jackie is, indeed, "hot". After this, Eric has shown to have a sexual attraction to her, as shown in many episodes.

Jackie is often a victim of Eric transferring his sibling hostility onto her. When Laurie's character is not on the show, Eric's hostility toward Jackie becomes more obvious, and he insults Jackie with the same terms and ideas as he does Laurie (e.g., "the devil," Jackie's "made from hellfire," etc.) This means their more constant burning of each other as the show went on is a result to Laurie's character not being present anymore, as she expressed a high opinion of Eric in the beginning.

The two have many moments of compassion for each other on the show.

Eric defends Jackie in the basement against Laurie, telling them she'd rather have Jackie hang out than Laurie.

What Is and What Should Never Be

Do You Think It's Alright?

Don't Lie to Me

On With the Show

Till the Next Goodbye

Eric and Jackie shippers are a passionate group of fans. In fan fiction, they give the characters a romantic subtext that isn't present in the show, but had certain changes been made, it well could have been. They often interpret the non-canon couple's mutual hostility as having an underlying sexual tension, as well as giving the compassionate moments between them more significance. Their stories explore what the show does not and illustrates what never existed between the two characters. Quite humorously, the That 70's Show FanFiction website archive holds many more romantic/friendship stories about Eric and Jackie, a fictional pairing that never happened on the show, then the Eric and Donna romance stories, which was the main pairing over most of the show's run. That said, many 'Jeric' fans consider the Eric and Donna pairing to be flawed with Donna constantly berating Eric for incredibly small and meaningless things like not informing her of a girlfriend he dated while they weren't together anymore when, quite hypocritically so, Donna can kiss many different men throughout the show's run while they were together, such as Fez (twice), Hyde, Mitch and even a milkman. As well as Donna willingly letting Kelso grope and squeeze her butt for '10 whole seconds'. Thus, fans see Eric and Jackie as a likely match for each other; both wanting a meaningful relationship with faithful partners, as their respective partners show they can't commit like that. As well as a committed relationship with someone that they love, both Jackie and Eric long for a marriage with someone they can possibly spend the rest of their days with, something which seems to be the polar opposite of what their respective lovers wanted with them. Many fans see the ending of season 8 as a jumping off point for 'The Forbidden Ship' to gradually grow closer through different stories being told during and after the series ended. For example; Eric returning home from Africa to see his 'always the same old, same old' friends having become very different in his absence, while Jackie seems to have changed in a way Eric didn't expect, but he gradually welcomes and can relate to. Some stories start the beginning of Eric and Jackie's relationship right from the pilot episode even to the California plot of season 5, such as Eric being 'coerced' by Jackie to go to California (obviously an alternate universe where Kelso and Donna don't take off to California but Eric and Jackie going instead due to scenarios unfolding in different ways beforehand) with her since he has a car to take them while she supplies the money for the two to reach California to have a much needed vacation from their respective 'significant others'. New stories for the 'Schrodinger's cat couple' of That 70's Show are being posted quite frequently and the in-progress ones are being updated with surprising consistency. Showing that the pairing of Eric and Jackie being friends or even lovers wasn't a far off concept for many fans to think about with the large following the would be couple has. 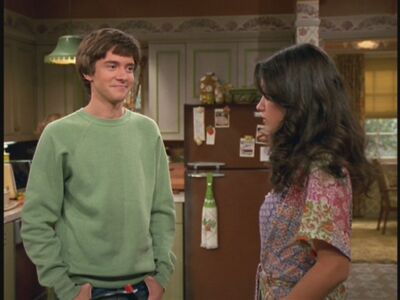 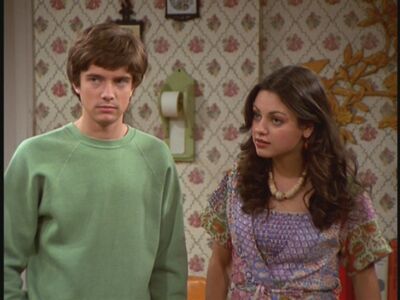 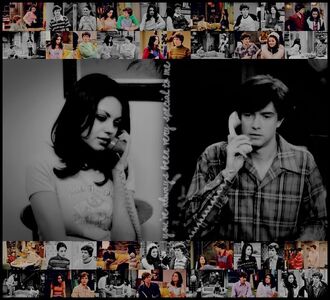